Classifications differ a bit between humans and animals, but the definition of “third degree” (burns) indicates a thermal injury which destroys the “full thickness” of the skin; epidermis and dermis AND often penetrating the subcutaneous layer to one extent or another…which was certainly the case here!

The significant depth of Max’s burns certainly seemed to reflect the considerable difficulty firefighters were confronted with in securing his rescue. Direct accounts of the utterly chaotic event indicated he was VERY difficult to reach, as he was altogether AS afraid of the appearance of the be-goggled/masked firefighters as the fire itself!

While a dog’s hair coat provides an excellent first-line barrier of protection against things like fire, any liquid(s) would (especially if super-heated) would necessarily and immediately penetrate this impediment. Undoubtedly, the normally beneficial tendencies of an excellent watch dog in trying to fend off strangers worked against Max as water and flame retardant soaked the fur and skin on his back side (including head, neck, and ear) before anyone could get a hold on the scrappy little dude! 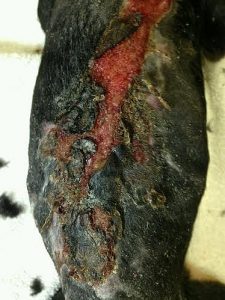 After overcoming the horror of Max’s initial appearance (and after a couple days of intensive care and recovery in the hospital, it was decided with the Partida family that Max might be best off going home for awhile, until such time as it would be more clear exactly what/which skin might survive and what would not. Obviously, there were major financial concerns for the family, as they had just lost everything and (also) unfortunately were not insured. While Max was obviously going to need considerable skin grafting and reconstruction, it was the family’s feeling that cosmetics were NOT going to be important, and they wanted to try to do the least practical amount/extent of surgery. 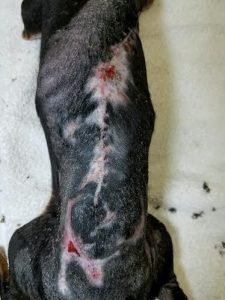 The first photo shows the majority of the extent of Max’s burns over the back (but not the head, neck, or left ear) AS they appeared before the FIRST surgical procedure, which was about 14 days after the injury. The second photo was taken before the second surgery, and the third approximately two weeks AFTER the second procedure. We look forward to seeing how it looks once more hair grows back! 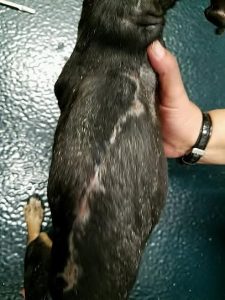 Because this was a case where the dog had immediate needs AND it was never absolutely clear what and to what extent more might need to be done, Alpen Veterinary Hospital has thus far absorbed all of the costs associated with the case. As we can all appreciate, it will be some time before the family is back on their feet. Any donations or contributions to the cause would be MOST greatly and graciously appreciated. We are hoping to post a final update photo (or series of them) of Max, and will include any list of people willing to share in this endeavor!

Please let us know if you would like to see more such case reports (NOT charitable ones) in the future! We will post this (AND others) at DaactorT.Wordpress.com going forward!

We will do our best to accommodate your busy schedule. Request an appointment today!

Accessibility by WAH
Call Us Text Us